This tale of gamers is so massive that by the time I finish it, I doubt the internet will remotely resemble what we know today. Still, I will start as I mean to go on. For those that have been following my WIP, I apologize for the repetition of content. It will be one-time only, and I hope to get some new stuff on here shortly.

My 'army' will be both sides of the Battle of Lundy's Lane, 1814. This was a battle fought in North American during the War of 1812. On one side was the invading Americans under Major General Jacob Brown. This army was one of the first that the Americans fielded in the war which had received sufficient training and quality leadership to be able to defeat the British on the open field. They had proved this earlier the same month at the Battle of Chippawa.

The British defenders -- Canada was a British coloney and not yet a country -- were reinforced by Lieutenant General Gordon Drummond, Lieutenant Governor of Upper Canada (Ontario) and troops fresh from the Peninsular War. Drummond ordered a stand made at Lundy's Lane, a small lane which ran perpendicular to the main road and the Niagara River. The battlefield was dominated by a low ridge crowned by a cemetary and small church. The British arrayed themseves for battle on this ridge.

The fighting was bloody and "obstinate beyond description." The majority of it occured during darkness. At times the range was so close that witnesses describes the muzzle-flashes mingling from both sides. The Americans captured the ridge, forcing the British back and taking their guns. The British mounted repeated counter-attacks but failed to regain their ground.

Eventually, the British withdrew to regroup and the Americans, taken their chance, withdrew to their camp. Both sides claimed the victory.

Strategically it was a British victory. The Americans' march was stopped and they retreated on a captured fort. A British siege failed to take the defences, but the Americans' invasion plans were ruined. They retreated back across the Niagara River to American soil. This would be the last American offensive of the war.

Well, that's enough for now. Once I paint some more stuff I'll describe more of my plans for the battle.

Here if the first base of five needed for my first unit.
Planning: 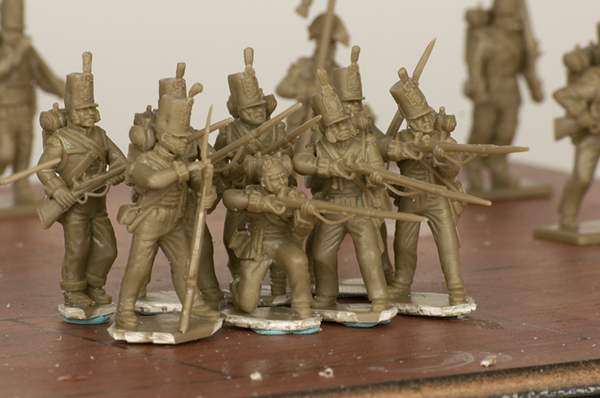 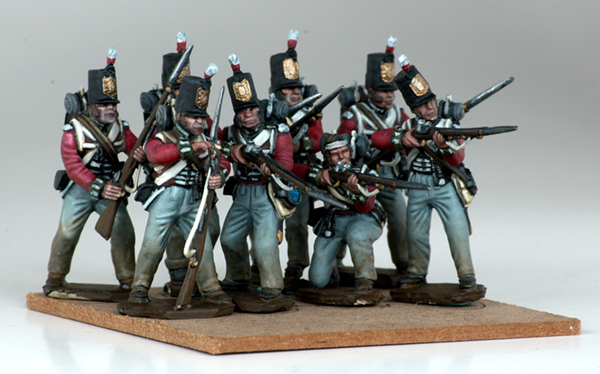 Maybe limit it to just a few units? This is like a life-long project

Back in the garage with my bullshit detector
Top

So, I'm planning the battle in 1:10 figure scale. For every 10 men in the battle I will paint 1 miniature. This will come close to 600 figures.
Top

That group shot looks so good, can't wait to see hundreds of these together!

Definately, the group shot is awesome, individually they are good too. I think a whole battalion will look awesome.
Top

great to see your infantry in this section!
as mentioned - they look sooo sweet as group!

Return to “Tale of gamers”